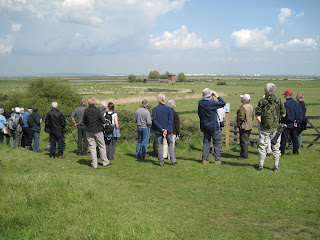 23 people joined Malcolm for the second of our Tuesday walks.   We were joined by Julian Nash the RSPB Site Manager, and as we gathered in the car park we saw turtle dove perched and cuckoo flying by.   Much time was spent listening to blackcap, whitethroat and lesser whitethroat and trying to separate them – some of us were more successful than others!   Looking out over the marshes we were able to spot two yellow wagtails, whitethroat, and avocet.   A family of oystercatchers took our attention and everyone had chance to see them in the telescope – generously made available by one of the group.
Moving towards the heronry we were soon listening to cetti’s warbler, chiffchaff and sedge warbler.   The front of the group flushed a red-legged partridge.   As we watched little egret and grey heron there was a surprise sighting of buzzard flying by.   We were later advised by another visitor that two buzzard had been display flying, a great sight if you are lucky enough to see it.   As we entered the wood the sound of the rooks drowned out most of the other bird song for a while.
Soon we were in the area where nightingale have been known to sing, and it wasn’t long before we were treated to at least two birds singing – trying to locate them was almost impossible as they threw their voices from the safety of the undergrowth.   As we moved back towards Bromhey Farm, we spotted marsh harrier in the distance.
The spring flowers were in full swing, with bluebells, pink campion, yellow archangel, bugle and greater stitchwort.
Butterfly sightings: Green hairstreak, speckled wood, orange tip, peacock, large white.
Group total ytd: 126