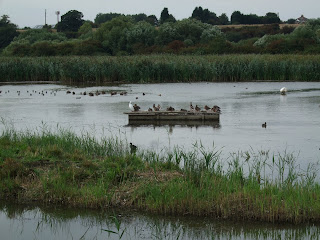 17 Group members gathered in the carpark on a warm but rather cloudy day. We set off on the boardwalk trail, walking slowly so that our leader, Paul, could catch up when he arrived! The wood was quiet but we heard chiffchaff & robin. Outside on the causeway we had views of a buzzard being mobbed by sparrowhawks & marsh harrier flying over the reed bed. Swallows & hobby were seen, probably migrating back to their winter quarters. This end of the reserve was very quiet however, so it was decided to drive round to Grove Ferry for the second half of the day as there were reports of a spotted crake…….

At Grove Ferry we had lunch, having managed to grab the last picnic table. A yellow wagtail was seen on the way to the viewpoint and large numbers of lapwings & greylags were gathered on the scrape. Hidden amongst them was a snipe but very little else. Further on at Feast’s Hide there were a good number of mallards, & a little egret & swan, but also a small wader in the corner that we agreed must be a green sandpiper. At Harrison Drove Hide the creme de la creme was a wood sandpiper!, feeding right next to a green sandpiper. Sadly no spotted crake. A total of 36 species were seen, or heard….