2010 has been an interesting birding year for me – having been allowed to join Malcolm and Paul on their ramblings in North Kent the year before, I decided that I would try to beat my previous UK best – a rather paltry 159 sometime back in the 80’s. 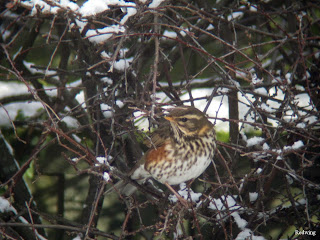 The year started off well with a flock of Redwing on the holly in my back garden, a new one to report to the BTO Garden Watch.   With my new mentors and more enthusiasm than I care to admit to, we set off in the snow in January – 8 Woodcock was the first memorable sighting of the year, and on our local patch at Northward Hill.   Nothing warms you better than the sight of these great birds flushing ahead of you on a snowy woodland path.
The North Kent marshes are a haven for a huge variety of birds and as winter gave way to spring huge numbers of waders gathered on the marshes and estuaries and at Riverside Country Park several hundred Black-tailed Godwits fed on the mud-flats their rufous-orange plumage glowing in the sunshine.
A trip up to Lincolnshire in May gave great views of Spotted Flycatcher, Temminck’s Stint, Wood Sandpiper and Oriental Pratincole (the latter creating rather a stir  – we managed to stay away from the main “Twitch” however). 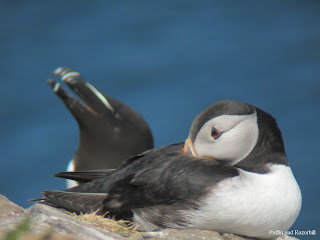 If it’s June it must be Wales – off with some photographer friends to Gower and Skomer – an area to be highly recommended.   Here I added Puffin, Razorbill, and Chough, and group trips to Knole and Minsmere gave me Little Owl, Dartford Warbler and my only good view all year of Sand Martin.   Given that Minsmere was where my birding began it was great that the Sand Martin was my 160th bird of the year.
I was happy to rest on my laurels, but Malcolm in his infinite wisdom and optimism decided that “200 is do-able, you have to keep going”.   Thanks Malcolm!
On the way back from Rye we called in at Dungeness to try to see the Purple Heron – unfortunately it was not to be on that occasion, however we bumped into Alan who had the telescope on a Red-Footed Falcon.
In July trips to Oare and Dungeness we saw Ruff, Black Redstart, and finally saw the Purple Heron.  The group trip to Thursley gave us superb views of Hobby catching dragonflies (albeit we were trying to watch the dragonflies at the time!).
August brought a trip to Lancashire to meet up with one of my birding mates – his “job” is leading bird tours in South America (I know – it’s a hard life) his knowledge is excellent and having carried out bird surveys for the RSPB in previous years, he was in a prime position to get us to the best spots for some great views of Hen Harrier, Grouse and Dipper, but best of all was Goshawk flying just above the trees and using the rides in the forest for hunting, it was a fantastic sight.   A day at the Bird Fair at Rutland Water gave us the opportunity to pop over to see the Osprey there bringing the list to 169. 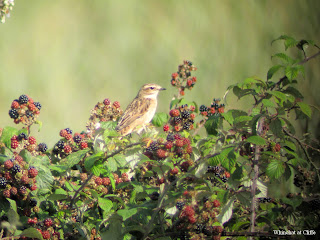 September, and with renewed enthusiasm for the impending migration season, we set off for Cliffe, and low and behold Red-backed Shrike, Spotted Redshank and Whinchat were duly added to the list.   Oare had Little Stint, and Grove Ferry held a Wilson’s Phalarope.
October started with a group trip to Dungeness – after a morning spent watching the patch, we went off to the reserve, on arrival we realised there must be something around, there were lots of serious looking men in camo gear with ‘scopes – more than just the usual Sunday birders wanting a nice day out!   Checking the board gave no clue, but soon Ian’s phone buzzed with news of a Barred Warbler on the reserve – it would have been churlish not to stop off on our way to Denge Marsh Hide.   The Great White Egret was also showing itself well next to a Little Egret – great perspective.   As we were in the area a quick trip to see if the Buff-breasted Sandpipers were still around and thanks to Sally we were lucky enough to see them too.   Another great birding day.
Now you may be feeling that it’s all getting a bit too twitchy – but as the year progressed the excitement was mounting.   I kept reminding myself that 160 was the aim, and I did that with style and time to spare.  But, having friends all over the country is a great excuse to bird different areas and October brought a trip to Somerset.   Whooper Swan and Red Necked Grebe joined the merry throng, and on the way back a day in Brownsea with friends trying to photograph Red Squirrel gave me an excellent opportunity to add Spoonbill to my sightings.
Redpoll at Fingringhoe and Bullfinch at Pulborough in November and I’m on 196 for the year!
With opportunities for days out birding getting fewer I had to call in the big guns, and made off for a friend who lives near Rye.   The threat was that I would stay as long as it took!!   All those who know me will realise what an excellent motivator that was and hey presto – I had seen four new birds by 10.15 am (we did start at 6.30 am) Tawny Owl, Brambling, Siskin and (not so)Common Redpoll brought it to 200.   However, not happy to rely on my addition, I was encouraged to set off for Pett Level pools where a Grey Phalarope had been spotted a day or so before, happily it was still there with its ‘spinning top’ feeding action – one more great sight to remember.
So there you have it, 201 species seen by the middle of November, and not just a great sense of achievement; some fantastic memories of great days out, wonderful sights and sounds and a far greater understanding and appreciation of these incredible creatures can be gained by spending time watching them in their natural environment.   None of this would have been possible without the help, support and encouragement of a whole host of friends, Malcolm, Sally and Paul in particular.   I have some great memories of lovely days out, great birds, good company – so thank you for all you’ve done.
Oh, and if you want to know which was my most memorable sight of the year, well, it has to be watching a Barn Owl on Sheppey, as it hunted the ditches completely oblivious to our presence, a real privilege.
Sue Healey