Those of you who have walked with Malcolm, will understand today’s dilemma.   There were two women out on the loose, Irene and myself being the only two remaining members of our Wednesday walkers – but we managed our identifications without assistance [sorry to disappoint you Malcolm!]

We decided on Oare as it always produces a good number of waders and there is always the chance of a harrier or other bird of prey.   Although we arrived at the lowest of tides, it did not disappoint. 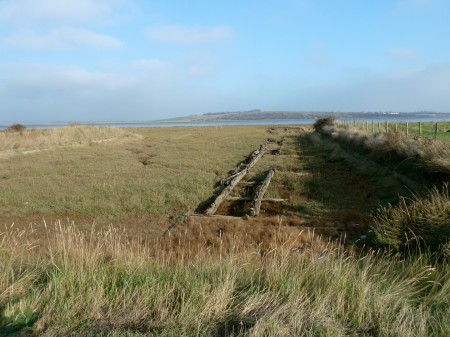 We started out walking west along the seawall towards the old jetty.   On the mud there were over 100 redshank, at least 200 dunlin, a few curlew and several grey plover.   On the fields behind the sea wall crows fed around the feed of the konick ponies.   A few mallard and teal were enjoying the peace and quiet of a small pool in the field.   At the pond behind the jetty there were reed bunting, robin, chaffinch, dunnock and wren.   Herons stood stoically in the reeds waiting for a tasty morsel to pass within reach.

On the way back to the car park we also saw oystercatcher, meadow pipit and shelduck.   After collecting our lunch we moved off towards the hide at the mouth of the creek.   There were more redshank, curlew and a huge number of avocet on the mud at the waters edge, a cetti’s warbler called from a nearby bush.   Soon after we arrived at the hide all the avocets flew up – something had disturbed them.   As we watched, a short-eared owl appeared, it was mobbed by the avocet until it moved away from them, it came towards us gliding along on those strong wings making no sound.   It flew past the hide and onto the reserve.   The avocets started to settle back down, some in front of the hide and the rest joining others on the far side of the creek.

After taking our lunch, we were ready to move on along the side of the creek.   Within seconds we spotted the owl again, quartering over the long grass inside the seawall.   As it moved around the reserve it’s presence was announced by the disturbance caused to the dunlin, black-tailed godwit and lapwing.    We stood on the seawall for about 10 minutes watching the owl, at one stage it sat on the ground in the long grass, as it turned the white edged face with huge eyes presented an eerie sight.

Avocets on the mud

Eventually, it moved over the seawall and disappeared from view.As we continued along the path a female marsh harrier rose from the reeds where we had seen it land earlier. In the southerly corner of the pool godwit, teal, lapwing, mallard, and starling were huddled in the sunshine. We had been bemoaning the lack of beareded tit and within minutes we heard the distinctive ‘ping’ and on turning around there were at least six feeding on the seedheads of the reeds. We watched for a while as at least two striking males and their harems moved along the line at the edge of the field. Mixed in with a flock of lapwing were some ruff.

A greenfinch heralded our arrival at the final hide from where we saw another female marsh harrier with far more cream on its head and shoulders.   From the hide we could see wigeon, moorhen, coot, little egret, little grebe, grey heron, ringed plover, more avocet, and at least six pintail.

Pheasant and blackbird were added to our day’s tally before we left for home.