Holborough marshes lies beside the River Medway in Snodland. We started by the Church and followed the river through a small housing estate where house martin nests were clinging to the eaves – we counted seven nests just in the area we walked. I really have a soft spot for house martins as they nested on my house twenty years ago. Sadly they have not been back in recent years – in fact I rarely see them at home. Repairs were taking place in some, whilst others were flying back and forth with food.

Opposite the houses were fields with shelduck and canada geese. As we neared the reserve itself goldfinch, wren, dunnock, swallow, and song thrush were spotted. In one tree we found a long-tailed tit nest with lichen, feathers and moss. 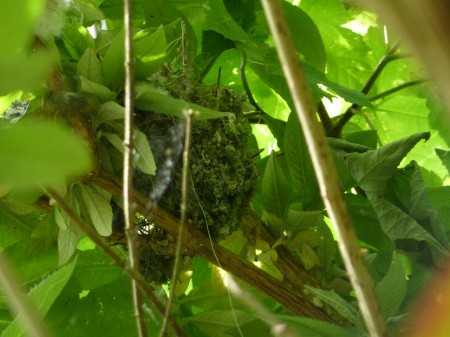 In the woodland area there were wood avens, goatsbeard and ransomes, whilst we were looking at these chiffchaff and cetti’s warbler were singing. A group of rather interesting longhorn moth were dancing about a nearby tree. Unlike the ones we saw last week, these had a bronze iridescence and a gold stripe across the wing about two thirds from the head.

The path running alongside the river opens out and you get a great overview of the reserve meadows on one side and reed beds and the Medway on the other. Over the river swift and hobby flew and in the shrubs and trees edging the meadows we had greenfinch, whitethroat, a pair of pheasant, blue tit and wood pigeon. The reedbed held at least three singing male reed buntings – vying with each other over territory, and reed warblers. Common blue butterfly were also flying.

A cuckoo called, as grey heron and cormorant followed the line of the river. Black-headed and mediterranean gull were circling. Malcolm heard lesser whitethroat. Eventually it was time to turn inland and follow the path between flower meadows and lined with scrub and hedges. Scarlet pimpernel, wild rose, foxglove, forget-me-not and stonecrop grew on the edge of the path.

Within minutes we heard the distinctive purr of turtle dove, we heard a second as we continued on our walk. Willow warbler was heard and then seen. Brimstone, small copper and orange tip were joined by holly blue on our increasing butterfly list.

The final delight was man orchid and maiden pink – courtesy of Stephen and John – and a great tit nest in a metal fence post beside the footpath.

We took lunch at Leybourne Lakes, and as we picnicked by the lake we heard nightingale, in the end at least four were calling in the first few hundred yards that we walked. Greylag were stalking all the visitors for food, teaching the youngsters the art of begging and intimidating in equal measure. On the lake were mallard, coot and great crested grebe – sharing the water with enthusiastic (or maybe insane) swimmers and divers.

Banded demoiselle and hairy dragonfly were hawking along the small streams and blue damselflies were travelling in pairs as the male protected their female whilst the eggs were laid.   Water vole droppings were found on a wooden plank in the same stream.

A couple of cuckoo were calling nearby, and with magpie and collared dove our walk was complete and we got back to the car as the rain started to fall.