Back in the swing of birdwatching and today was a trip to Bough Beech and Sevenoaks.   Although birdwatching is always a little quiet at this time of year,  it will have to liven up eventually though – won’t it?

Today started well with a Hobby flying low over the car park at Bough Beech, as it swooped and soared it was mobbed continually by Swallow – lots of them – taking their life in their hands and protecting the others in their flock.   Just over our heads and around the car park flew adults still feeding at least five young in two nests high in the open barn.   We stood watching as they whizzed around us, feeding continually.   The young were sitting with their bills resting on the edge of the nest, gapes in full view to make sure that they didn’t miss any opportunity to feed.   A superb start.

The Lake at Bough Beech

Whilst I tried (unsuccessfully) to digiscope the Swallows, Irene and Malcolm had noticed some strange growth on a nearby Oak tree.   On the end of branches were long, thin twigs with fresh leaves on the end.   Malcolm had read somewhere that they were referred to as Lammas growth and charged me with some research so here goes …..
“Lammas growth is also called Lammas leaves, Lammas flush, second shoots, or summer shoots, and is a season of renewed growth in some trees in temperate regions put on in July and August that is around Lammas day, August 1, which is the Celtic harvest festival.   Examples of common trees which exhibit regrowth are oak, ash, beech, sycamore, yew, scots pine, sitka spruce and hawthorn.   This secondary growth may be an evolutionary strategy to compensate for leaf damage caused by insects during the spring.
Lammas growth declines with the age of the tree, being most vigorous and noticeable in young trees.   It differs in nature from spring growth which is fixed when leaves and shoots are laid down in the bud the previous year.   The lammas flush is free growth of newly made leaves/needles throughout the tree.   One or more of the buds set in the Spring on the ends of terminal and lateral stems will break, and begin to grow, producing a new shoot.” Thanks to Wikipedia for that.
So now you know

Back to the birds and from the new hide overlooking the pond we found two Grey Heron, Moorhen, Jackdaw, a high-flying Common Buzzard, Goldfinch, a Kestrel perched on nearby wires and the best view this year so far of a Kingfisher.    I also spotted two Stock Doves on a distant wire and juvenile Linnet in one of the dead trees overlooking the pond. After a break for lunch, and a very welcome tea, it was time to move off to Sevenoaks Wildlife Reserve.   Here were the usual birds on the lake, including Cormorant, Greylag, Canada, and Egyptian Geese. Lapwing, both adult and obvious juvenile were gathering in flocks, and on the water were Tufted Duck, Pochard, Mallard, Mute Swan, Black-headed Gull, Great-crested Grebe, Teal, and Coot.   Pied Wagtail fed along the edges of the pools, dipping their tails in the usual fashion.   Wood pigeons, Magpie and Starling were seen in the trees. 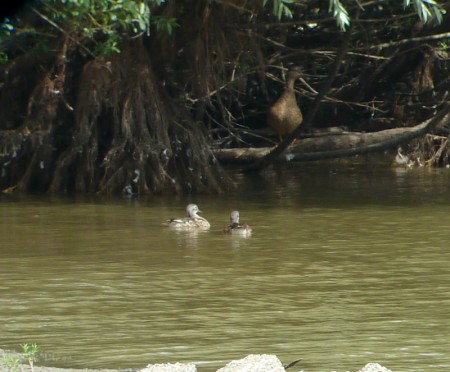 From Willow Hide we spotted Migrant Hawker and Blue-tailed Damselfy, along with more Mute Swan, Tufted Duck, and Coot.   Just to top our day off, a Kingfisher flew across in front of the hide and then perched in a tree on the far side of the pool, allowing us great views.

Any day when you see a Kingfisher is great, but two – makes it extra-special