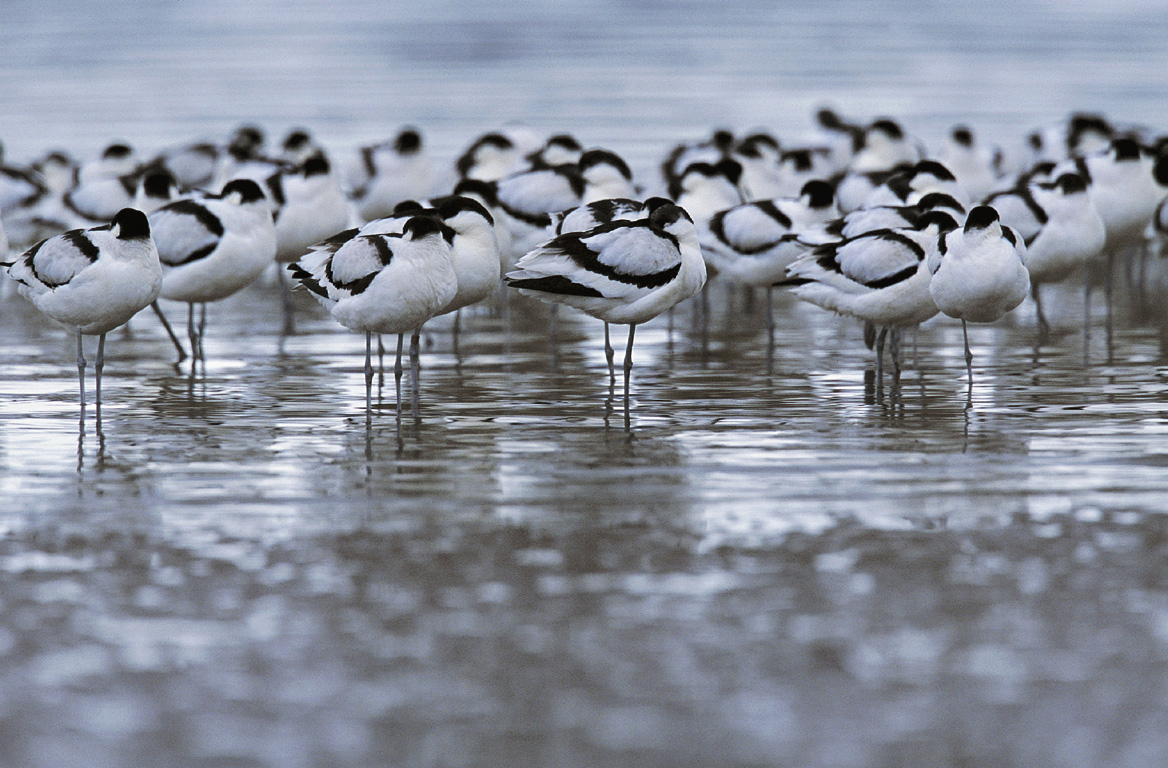 I often start by talking about the weather, mainly because it has been utterly erratic, but this time we are basking in what has been a glorious spring, ‘proper’ summer, and an ‘Indian summer’. The trees are beginning to turn and the bushes are bursting with fruit, we’ve had some good rain throughout the season to keep things lush and nature has revelled in it. This is not before time, invertebrates in particular needed to recover from some really poor years.

The RSPB team of staff and volunteers saw the opportunity and worked the land really hard to maximise the opportunity for a productive breeding season… and it worked out superbly but there is a note of caution, we measure success in two tiers: first of all, it is a good thing if pairs try to breed, but most important they must successfully fledge chicks; the story of the black-winged stilts at RSPB Cliffe Pools makes the point most appositely. It is fantastic that they found RSPB Cliffe Pools a suitable place to nest, but they would have done better to sit amongst the avocets and not the black-headed gulls. The chicks hatched and were promptly snaffled by the neighbours! The collective defense of our brand bird would have stacked the odds in the stilts’ favour. The new developments at RSPB Cliffe Pools (reported previously) have greatly encouraged avocet breeding pairs: 2008 = 10, 2009 = 7, 2010 = 6, 2011 = 2, 2012 = 60, 2013 = 57, 2014 = 126! The number of chicks fledged this year is below our target, but at least things are moving in the right direction, and, to top it all stalwart ornithologist, Murray Orchard, counted 2,450 avocets on the high tide roost at RSPB Cliffe Pools on September 14th. This is the largest single flock ever recorded in the UK. It is thought that the birds arrived from the Netherlands following a spate of easterly winds; the fact that they see Cliffe as a suitable place to live a part of their lives is a true measure of success. 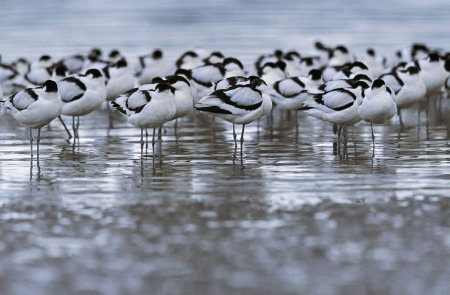 This challenge of converting breeding pairs into fledged chicks applies equally to common terns at Cliffe. Breeding pairs so far: 2012 = 30, 2013 = 83, 2014 = 34, but we think foxes (and perhaps badgers) are getting out to the islands and hoovering-up chicks. We are currently developing long-term plans to enhance the habitat at the reserve and to improve the obstacles to land predators.

There will be a public consultation held at St. Helens Hall, Cliffe, 4-9pm, Wednesday 23rd October, you are all invited to come along and see our plans. We hope to obtain further dredged material and arisings from the Thames and London tunnelling projects, and, using those materials that are suitable for Cliffe Pools, to create new shallows, beaches and scalloped islands. The new features will support diving ducks, breeding waders and wildfowl, passage and wintering waders and wildfowl, continued high tide roosts and other non-avian species of conservation concern that live in and around the lagoons themselves. In particular, we will maintain the important saline lagoon invertebrate population that lives in the water and provide better conditions for the assemblage to proliferate further. The water circulation will be improved and the access by land predators limited. We are working in partnership with Boskalis Westminster Ltd, one of the UK’s leading dredging contractors. This is a long-term project and we need planning permission because the site is a SSSI and SPA; the public consultation precedes our application.

Next door, Brett Aggregates have a similar aspiration and have made a planning application to receive arisings to fill in Alpha Pool. Bretts recognise they could combine a commercial opportunity with a potential enhancement of the ecological value of the Special Protection Area and so they have approached the RSPB for advice, which we have duly offered. The RSPB is not in partnership with Bretts, and there is no formal arrangement between us. The RSPB has offered its advice in the same way that it does to farmers seeking to improve land in their ownership for wildlife. Any impact to tenants on the landowner’s site as a consequence of their decision to change the land use is a matter entirely for the landowner to address. Therefore, anyone with concerns about the yacht club that currently leases Alpha Pool from Brett Aggregates should be directed to the yacht club committee or Brett Aggregates.

There are technical and logistical differences between the two projects, they constitute separate planning applications, and the management of each remains solely with the respective landowners.

Redshanks had an average year, with 26 pairs breeding; it is very difficult to determine how many chicks fledge for this species. However, if we consider redshank productivity is in direct correlation to lapwing, then there is cause for optimism. 13 pairs of breeding lapwings was lower than usual, but the average number of chicks fledged per pair was 1.15, this smashed our target of 0.6 to 0.8 chicks per pair. This ‘productivity’ figure is the best means by which we can assess whether a population can grow. 0.6 to0.8 means that the population will not decrease, more than 0.6 to 0.8 means that the population will increase. We are very grateful to everyone who helped to monitor the nests and chicks through the season; it was good news for lapwings across the marshes.

Six pairs of marsh harriers bred successfully at Northward Hill (equaling RSPB Minsmere!), and productivity was 2.33. 22 pairs of nightingales and 76 whitethroats was an average year, but all great news for these struggling species. 10 pairs of green woodpeckers (amber listed) was a record, and 6 calling cuckoos (red listed) was a new high, but our joy is being tempered by the struggle to maintain turtle doves breeding at Northward Hill. We have, at least, maintained 1 pair at the reserve for each of the last two years and are undertaking specific actions that we hope will help this species; we have planted a special food crop, and hope, along with national efforts, that we may hang on to this charismatic bird that is on the brink of UK extinction. 37 mallard, 11 great-spotted woodpecker and 2 mistle thrush pairs are all new records for the site plus 200 pairs of grey herons! 83 little egrets is a little down on previous counts.

Often overlooked Nor Marsh, in the middle of the Medway Estuary, had a record number of breeding oystercatchers: 2011 = 5, 2012 = 21, 2013 = 22, 2014 = 90! I think the lesson there is that sometimes birds need to move. Just because a reserve is not stacked with a species one year, does not mean they will not move in the next; we need to present the opportunity. Terns are especially prone to this sort of mass movement, and we hope in time to improve RSPB Nor Marsh and Cliffe Pools so that terns can take up residence when they so choose.

I would like to end on an especially good note. I think we are all very much bought into the idea that the RSPB is about ‘giving nature a home’ and that there are many different ways of achieving this. Tom Ledger is a farmer on the marshes at Higham, and he wanted his land to do more for nature while also grazing his sheep and cattle. With funding from the Nature Improvement Area scheme, and a management agreement with the RSPB, Tom was able to improve his land for wildlife. Julian Nash (Site Manager – North Kent Marshes) designed an improvement plan that involved quite a bit of re-landscaping and controlled flooding of the farmland to encourage birds – we call it ‘green to blue’. We completed 25% of the scheme in 2013, and this year the remaining 75%, which actually constitutes rather less work, is being done this year. How did our target species do? Redshank breeding pairs: 2012 = 4, 2013 = 0, 2014 = 10! Lapwing: 2012 = 6, 2013 = 2, 2014 = 16! Productivity was 1.69.

I could go on! I just wanted to share some of the ‘data’, the scientific, tangible evidence with you that the work that you do or support at the RSPB is delivering for nature on the North Kent Marshes. 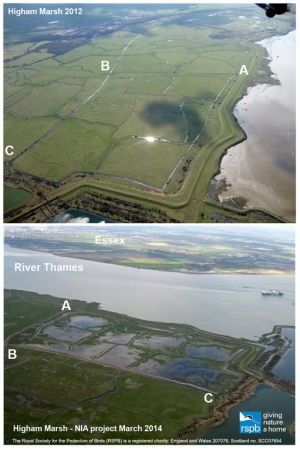 In the mean time, it is my personal view that the RSPB saved the Thames Estuary from being short-listed for an international airport by the Government’s aviation commission. It involved a huge amount of work at local, regional and national level, and we saw good sense win through. The commission visited our reserves to see what it was all about. Now we are fighting hard to save Lodge Hill SSSI (on the Hoo Peninsula) from development – this is as serious! The development makes a mockery of the National Planning Policy Framework and would leave SSSIs across the country at risk of the same fate. Thank you to the 11,000 individuals who responded to our campaign and wrote to the Secretary of State expressing their concern over Medway Council’s consent to Land Securities for outline planning permission of 5,000 homes. Medway Council believes that 85 pairs of nightingales, at least 1% of the UK’s breeding population, can be moved to a new site in Essex! Julian Nash (RSPB) said: “Yes, we do create habitat on an almost daily basis and do expect species to move into our new habitats, but we don’t do it to displace species from one important habitat to another and, most importantly, we do it in appropriate places to increase populations of species of conservation concern i.e. arable to wet grassland, not to move a small population around the country as lip-service to conservation, which is ridiculous.”