Irene, Terry and I visited a cold, grey and breezy Shellness on Wednesday.    After the bumpy ride down to the car park, we sat in the car watching as two red-legged partridge walked up to the top of the sea wall and then flew inland to the safety of long grass in a nearby field.

Suitably dressed in our layers to keep out the cold north easterly wind, we were greeted by a bramble bush full of reed bunting, house sparrow and one or two chaffinch.   Cold and grey as the day was, several skylark were singing – so high we could not see them – and meadow pipit joined in the fun with their parachuting display.

We decided to walk along towards the Swale NNR as it was just coming up to high tide, and there appeared to be a large number of swans in a nearby field.   As we wandered along the sea wall path Irene set up the telescope to scan through the many swans, all of which turned out to be our well-know mute swan, with the exception of one black swan – presumably an escapee!

As we watched black-headed gulls displaying, a short-eared owl appeared from behind us and gave the most brilliant display as it hunted along the inland bank of the sea wall.   We watched, delighting in the twisting, turning and superb flight of this enigmatic creature.   I was immediately taken back to a recent trip to Estonia where we had seen a newly arrived migrant (it may have been one which had wintered in the UK).   That owl was resting in a field, and appeared to be exhausted by its journey, and seemed to be so small and vulnerable in comparison to the broad-winged strong and beautifully marked individual before us now. 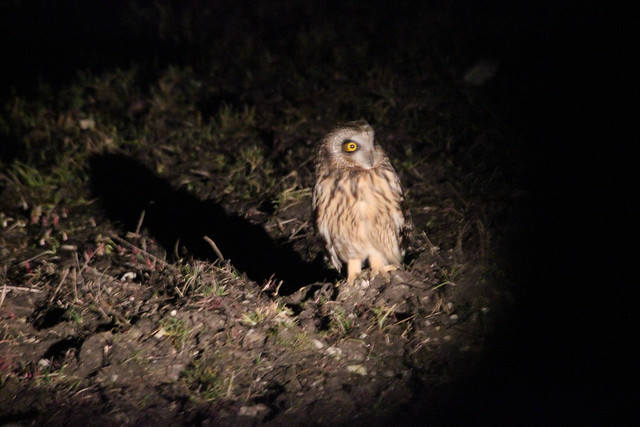 The owl continued to hunt along both sides of the sea-wall, and as we continued to watch, a second owl appeared.   The two birds flew towards each other, one appearing to “clap” its wings together before they separated to continue hunting in their respective areas. 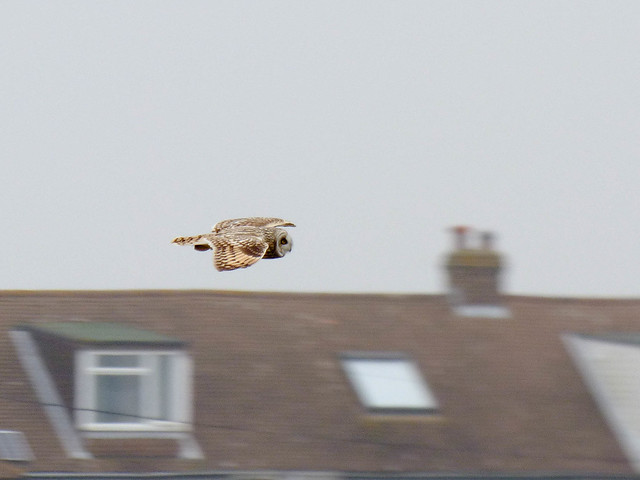 Standing watching these two had made us rather cold so we retreated to the car for a warming drink before heading for the coast by the blockhouse where the tide was just starting to recede.   A huge flock of oystercatcher were in the usual place in the sanctuary area, and there may well have been other waders with them, but the light prevented us seeing anything else.

As soon as some small area of sand was revealed by the tide, waders were flocking to feed in the area.   Large numbers of dunlin, grey plover, turnstone, ringed plover and a couple of bar-tailed godwit fed greedily as more of the sand was uncovered.   A helicopter flew over and disturbed the oystercatchers, which flew towards us and gave a spectacular display. 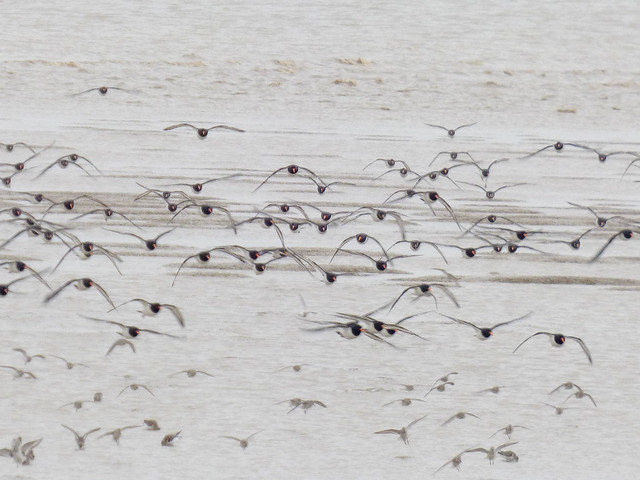 Several cormorants flew over and a single pintail, whilst half a dozen brent geese fed on the weed along the shore.

After lunch we moved to Capel Fleet Viewpoint, on the way passing more red-legged partridge.   A pair of curlew strutted on a bank beside the pool which was brimming with black-headed gull, coot, mallard, shelduck and mallard.   Sadly we noticed two dead mute swan which appeared to have struck the overhead wires.   We noticed several kestrel hovering as we drove along and also watched as one sat on a fence post near the road. 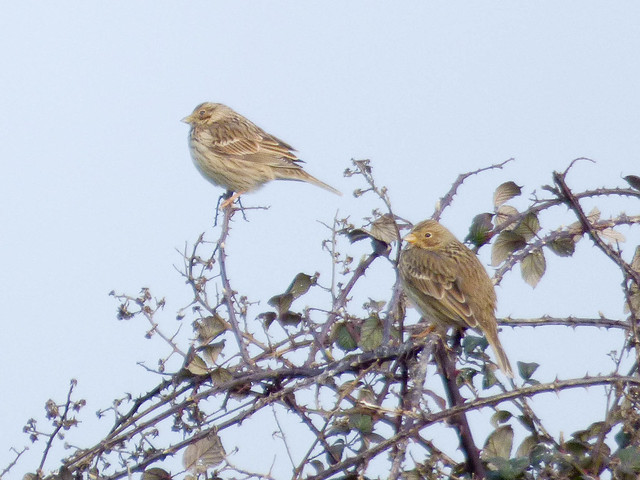 Corn bunting were present in their usual bush, and we used the car as a hide from the road as we listened and enjoyed their distinctive “key gangling” song.   Overhead a linnet sang from the overhead wire.   Once again skylark could be heard overhead, and a male pheasant in rich plumage sauntered along.   Several more red-legged partridge ran across the road and then played Russian Roulette with us as we moved off – Terry proceeded slowly until they had decided which side of the road to stick to!

From the viewpoint we counted eight marsh harriers, several common buzzard, three stock dove and a moorhen.  All in all a great day out.   Here’s looking forward to Oare Marshes on Sunday the 29th March.