This weekend saw the second Hen Harrier Day (HHD) take place. Although there were several events around the Country, as last year I was drawn back to my home county of Derbyshire, this time to the Goyt Valley near Buxton.

Saturday evening was spent at the Buxton Palace Hotel where Mark Avery ran proceedings, including Mike Clarke CEO RSPB, describing how he saw hen harriers when birding at Cliffe Pools and Capel Fleet Viewpoint as a child – and committing the Organisation to the ongoing protection of wildlife from illegal actions.

The Haltwhistle Project film Skydancer was shown – a brilliant film which is introduced by Finlay Wilde, an young conservationist who introduced a short film of how he made this years HHD props (a Shooting Butt, Poison Bottle, Gin Traps and Rifles!) and explaining what spurs him on to keep fighting for hen harriers.   A big announcement at the end of his presentation which just shows what one young person can do!   A lesson to us all – you’ll have to watch his film clip to find out what that was though.   Conceptual artist Jeremy Deller introduced his Turner prize winning work  A Good day for Cyclists depicting a hen harrier clutching a red Range Rover, and explained how he feels that art and conservation are linked and mutually beneficial in conversation with Mark Cocker.

The finale was the ever-brilliant Chris Packham – but more of him later!

So, Sunday morning, blue skies and sunshine – what a difference from last year where we got absolutely soaked!  The Goyt Valley was superb and on the walk to and from the car park, we carried out a mini-bioblitz and notched up a good list of birds, plants and insects.

Speakers at the event were Charlie Moores (Chair of Birders Against Wildlife Crime) who organised the event, Mark Avery, responsible for starting the whole idea of having a HHD,  Jo Smith (Derbyshire Wildlife Trust), Jeff Knott (RSPB), and of course  . . .  Chris Packham.

As we stood listening to the speakers, and cheering them along, I looked around at the hill behind us and saw a huge burned and bare scar which should have been covered in bracken, heather and many other plants.  This area (and the surrounding area) is currently being “managed” for grouse shooting and although there were many birds and insects on the lower slopes, nothing could be seen higher up. 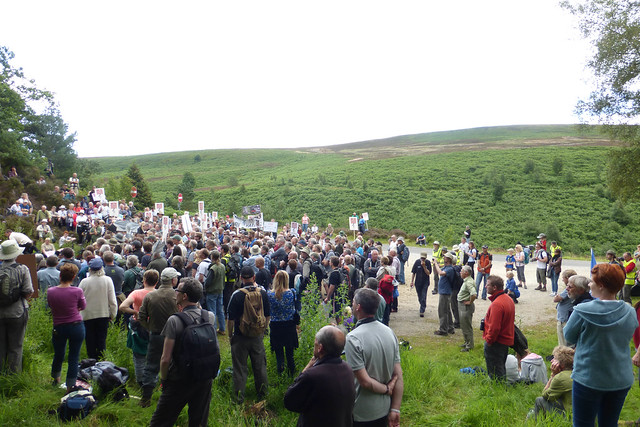 Left to recover and with the regrowth of plants would come wildlife and huge biodiversity – I can only wonder at how many hen harriers have soared over that hillside in the past – and maybe they will again in the not too distant future if we all help to raise awareness and support the huge efforts that are going into fighting the illegal killing of our native wildlife. . . . . . .

As we left the event a peregrine flew over – seemingly giving us a sign that things are turning – and if we all work together they will.

Links to film of the speakers here: HHD (thanks Rare Bird Alert)

Grateful thanks to all those who have supplied the film but are not named above.