An enthusiastic group met in the car park at Oare, some bearing news of birds they had already seen, wood sandpiper being one, and those that had already left – the Bonaparte’s gull had flown off with a group of black-headed gulls some ten minutes earlier!    Tempted by the thought of the sandpiper we decided to walk west along the seawall following Andy and Yuek who were keen to share their earlier sighting.

There were plenty of birds to see as we walked along, with a very active group of pied wagtail, some were juveniles and they were a delight to watch as they flew around in pairs showing off their acrobatic flight.  A group of lapwing flew up from the area where the sandpiper had originally been seen, but did not appear to fly off with them so we decided to scan for a while and see what else we could find.

Bee feeding in the wind and rain

Watching across the river on one side and the small scrape and marshes inland gave us a reasonable list including greylag geese, mute swan, mallard, coot, moorhen (with their young) and a couple of grey heron.  A curlew was seen by some along with great black-backed gull, a swallow and a few sand martin.

After much scanning for the wood sandpiper the only wader we could find was a sleeping common snipe. We decided to move back towards the slipway and watch as the incoming tide moved the birds towards us. There were common and sandwich tern, a few turnstone, redshank, and feeding black-tailed godwit along the waters edge.

Unfortunately at this stage the sky darkened and torrential rain forced us back to the cars for cover. Interestingly, as we sheltered in the cars there were large numbers of black-tailed godwit moving off the east flood.   As hide tide was due shortly, we usually see large numbers of these waders moving onto the flood to roost until feeding grounds are revealed on a falling tide.   We counted over 300 godwit moving away, at one stage we counted over 1,000 individuals flying in large groups – we did check as they flew and couldn’t find any without wing bars, so the ones we saw were all black-tailed godwit.   We also saw starling and wood pigeon from the car. 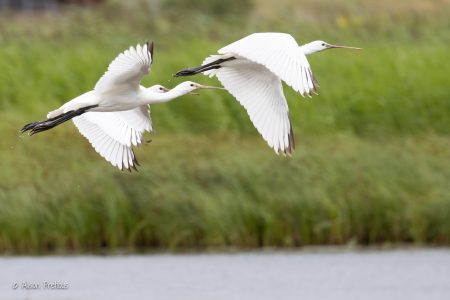 After ten minutes or so, the rain stopped and armed with our lunch we set off again.   The water on the floods at Oare is very high this year, leaving few areas for birds to roost – maybe this is why so many were moving off the reserve at high tide or maybe they were late arrivals having to fly elsewhere for high ride roost sites?   From the road we saw several ruff in with the remaining godwit, a few cormorant, more redshank, and a few swift flying through.   Suddenly three large white birds dropped in right in front of the group – three spoonbill, we watched them for a while as they fed, preened and slept, we believed it was one adult and two juveniles (adults have dark bills and juveniles pale), Alison’s great flight photograph seems to show all three birds with pale bills, but part of one of the bird’s bills is hidden, and seen full on one of them was definitely dark.   Here’s a photograph I took where one of the bills looks very dark – or was it just a trick of the light? 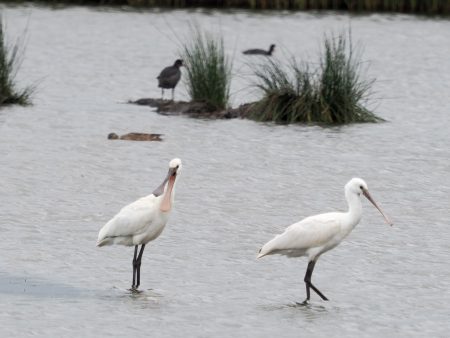 There was much excitement as we watched them feed then preen with a black-headed gulls until a grey heron flew in, putting up all the birds including the spoonbill who flew off towards Elmley.

Lunchtime was declared when we got to the hide, and just in time as another rain shower rolled in.   We spent some time watching the birds on the flood, including tufted duck, shoveler, little grebe, gadwall, seven avocet flew in, and buzzard was spotted hanging on the very strong breeze on the other side of the Swale, on the Isle of Sheppey.

Continuing along the seawall towards the end of Faversham Creek we saw the only marsh harrier of the day.    A male reed bunting appeared on a nearby wild carrot plant carry a green caterpillar and what looked like a grasshopper in its beak.   As the bird moved from perch to perch it appeared concerned at our presence so we moved away, to allow it to feed its young – finding anything after those two heavy downpours of rain must have been a challenge. 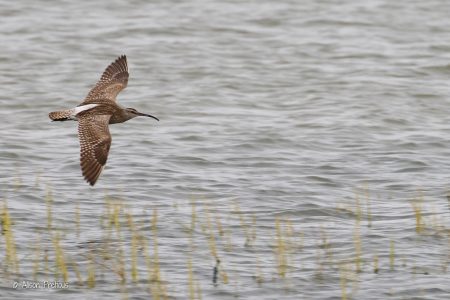 Common sandpiper gave some of us the slip on several occasions but eventually everyone managed to get good views as it fed along the edge of the water in the creek, a whimbrel gave a call overhead then landed in front of us, and as we stood by the hide at the end of the creek we had what was for me the bird species of the day – two little tern flew past us quite low and giving their distinctive call.   Superb to see them so well.   (see below for more information on them)

Continuing our journey back to the car park, we managed to see a few more species, including lesser black-backed gull, mediterranean gull and a mixed group of ringed plover and dunlin arrived.

It was great to meet up with friends not seen for a long time, thanks to everyone who attended and stayed despite the rather wet start, and to Alison for her wonderful photographs.

Our next walks are a dusk walk for bats at Mote Park on Friday 20th August and a Tuesday morning walk at Sevenoaks on 24th August.  Keep up to date via our website for the latest news of our events.

Oh, and a fly past by ten Red Arrows was another highlight for some!

Little tern are classified in the UK as amber under birds of conservation concern.   In recent years their populations have declined, believed to be due to climate change (higher tides and flooding of their nest sites), predation of eggs, chicks and adults, and disturbance, mainly human activities and dogs when they get too close to nest sites.

Kent Ornithological Society Bird Report for 2019 notes that in eight pairs attempted to breed in two sites. At one site where six apparently occupied nests were observed there were three fledged juveniles and in another site two pairs fledged one young.   So to see two birds at Oare was a real treat.