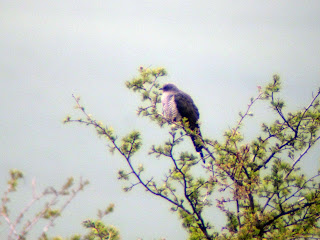 Apologies for the quality of the photo, but we had to share our first cuckoo of the year!
18 folk joined Ian for our second Stodmarsh walk this year.   We walked through the woodland initially, where we were surrounded by birdsong; chiffchaff, blackcap and bursts of cetti’s warbler.   Everyone managed to get good views of both male and female blackcap, and several people saw a tree creeper.   As we moved further along the track there was the unmistakable start of nightingale song.   As the group gathered nearby, the song built and we were treated to a full range of the superb repertoire, typically despite our efforts there was no clear sighting.
Light rain fell as we neared the end of the woodland, but the sound of water rail, sedge and reed warbler and the booming of bittern spurred us on.   Several people got views of the warblers, and a female bearded tit was seen flying low over the reeds by one lucky person.   Throughout the day we were treated to great views of both male and female harrier.
As we moved along it soon became apparent that there were a lot of visitors to the reserve and as our thoughts turned to lunch, (and a comfortable spot to partake thereof) we decided to push on.   Surrounded by the sedge and reed warblers and still with the occasional ‘boom’, our only stop was for a cuckoo, which the whole group saw – I just knew that Stodmarsh wouldn’t let us down.
Lunch brought views of common terns from Feast’s Hide.    We moved onto the viewpoint at the Grove Ferry end of the reserve, and soon had a splendid view of garganey in the ‘scopes.  One of the many highlights of the day was a great view of a hobby circling overhead enabling everyone to get good views, with huge numbers of swift, swallow and house martin flying over the pools.
Ian led us back through the reserve along the river, and here we saw whitethroat, great spotted woodpecker, greenshank, redshank, dunlin, little egret, and willow warbler.
A great day out, thanks to Ian for arranging both the birds and the weather!
YTD Group Total – 117