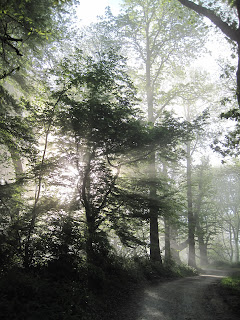 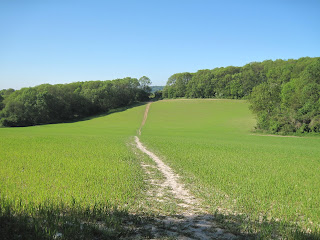 A dozen people got up early for this 6 am start.   Some arriving a little later than others!   Our aim was to enjoy the early morning birdsong and improve our identification skills.
As we left the car park we found several female glow-worms on the path.   We followed the main track to the Darnley Mausoleum which has been restored after being featured in the Restoration television programme.   Chaffinch, whitethroat, lesser whitethroat, blackcap and wren were singing, then we spotted a yellowhammer sitting ahead of us, giving everyone good views.   Dunnock, blackbird, and chiffchaff were among other songsters.   Two ring-necked parakeets called from the top of a tree.   We were lucky to watch several blue tit and great tit gathering food for their broods.   Treecreeper and garden warbler were also identified.   The area was the original site for the North Kent heronry, the birds relocating to Northward Hill around 1900.
We took the opportunity to view the Kitchen Field, the most important arable field in the country due to the plant life there.   As you can see from the photograph, we were just a little too early to see the plants and flowers for which the field is famous – perhaps time to plug our walk there at 10.00 am on 22nd June.
Other sightings: Peacock and orange tip butterfly, cinnabar moth, brown rimmed snail, 6 spot burnet caterpillar
Group YTD total : 128