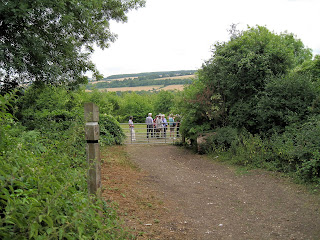 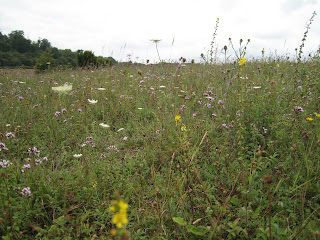 A lovely sunny day greeted us at Lullingstone, unfortunately the same could not be said for our walk leader, Malcolm who is currently doing a “hop-a-long-cassidy” impression, so it was left to Paul to step into the breach – a task which he fulfilled with aplomb.   As the group gathered in the car park a total of 10 jays were spotted flying between the trees and house sparrows were enjoying the crumbs left behind around the picnic tables.   Dunnock, robin, greenfinch, mistle and song thrush were also early sightings.
Paul initially led us uphill alongside a flower meadow towards the woods.   In the humidity of the day we took a steady stroll which was often punctuated by butterfly watching along the way.   Armed with butterfly net and viewing box Paul was able to show the group excellent views of various species – I apologise now for any omitted, as they were too plentiful to keep up with.  As we neared the woodland our birding highlight of the day – turtle dove – could be heard in the distance and once in the wood we heard at least three birds calling.   One was soon spotted in the top of a tree – excellent views were had by all thanks to Clifford’s telescope.
Moving out of the woodland we were about to cross the golf course when an eagle with a beautiful white tail was spotted circling overhead – as we marvelled at this magnificent sight we noticed jesses on the legs and realised that the proximity of Eagle Heights had provided us with probably the most unexpected sighting of the year.
Moving towards the Orchid Bank, we were surrounded by butterflies and (being careful to avoid golf balls) we made slow progress.  Yellowhammer and green woodpecker were calling, linnet, whitethroat and blackcap were seen, along with at least 12 goldfinch feeding on the thistle seeds.
Movements of swift, swallow and house martin were noted as we moved towards the final leg of our walk alongside the River Darenth,   Fox and weasel were also seen by those near the front of the group.
The river provided us with family groups of blue and great tit and the trees alongside provided welcome cover from the light shower of rain.
Many thanks to Paul for stepping in at short notice and providing us with such expert guidance.
Other sightings
Gatekeeper, holly blue, common blue, speckled wood, peacock, large white, brimstone, small copper, small heath
The photos show the group at Lullingstone, and flowers on the Orchid Bank
YTD total 139 species