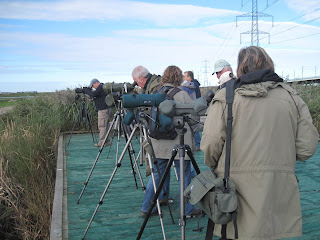 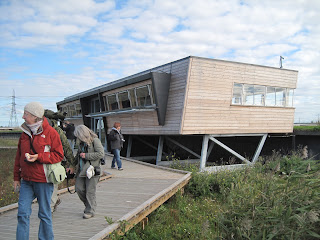 16 of us enjoyed an excellent walk around Rainham Marshes today, led by Jeff.   On arrival there was rumour of a Bluethroat which had been present yesterday, and a Ring Ouzel which had been around during the previous week.  Although those two birds eluded us there were plenty more to take our interest.
After checking in at reception we were soon on our way around the reserve, stopping to check the feeders where numerous house sparrows, goldfinch and greenfinch fed.   We checked the fields where there were greylag geese, grey heron, magpies, and starlings.   In the nearby trees we heard chiffchaff and as we watched blue tit and great tit, a song thrush and redwing flew over.
Moving towards the pools a cetti’s warbler sang several times and a stonechat sat on the top of one of the shrubby bushes in the reeds.   A kestrel was hunting and putting up starlings on the pylons, and as we scanned the birds one eagle-eyed spotter saw a peregrine perched on a cross-bar eating his prey.   Most of the group managed to get good shots of this through telescopes.   In the same vicinity we also had great views of a water rail which was busily feeding in the base of the reeds.
We also saw good number of birds on and around the pools including little egret, lapwing, wigeon, teal, shoveler, pochard, little grebe, canada goose, tufted duck, moorhen and coot.
Ian and Paul noticed a small group of pink-footed geese flying in and they landed immediately in front of a flock of greylag, giving us a great opportunity to compare and contrast the two species.   We moved into the new hide (pictured) and Jeff spotted a cormorant perched on top of an owl box, quite as incongruous sight with the pylons and railway line in the background.   We took another opportunity to watch the pink-foots, then moved on towards lunch at the centre, watching the fields and feeds for anything new to add to our list.   Pied wagtail were spotted, along with great views of both male and female whinchat and a reed bunting.   We also had good views of a couple of marsh frogs, sunbathing in the warmth of the October sunshine.
As we enjoyed our picnic lunch we watched the feeders again, still hoping to spot the lone tree sparrow, but it was not to be.
Thanks for a great walk Jeff and for arranging such lovely weather for us.