A cold morning for our coach trip to this RSPB reserve. However, our driver, Bernie, arrived early (despite all the road works around Grave send at the moment) and we were soon on our way to Pulborough Brooks.  We had a smooth journey to the reserve with the weather improving all the time.
At the feeders in front of the centre we watched blue and great tit. As we went off along the trail the roe deer specific to this area were sighted in the fields, Malcolm explained how to identify them from the markings on their rear, and Louise explained the history and significance of their colouring – the herd formerly being on a private estate and bred specifically in a dark form.
Moving off around the trail redwing, mistle thrush, song thrush, and goldfinch vied for our attention with lesser redpoll and greenfinch.   A kestrel hovered above us and nuthatch and goldcrest were feeding in the trees.   We watched some blackbirds in the hedgerows, and discussed the difference in bill colour with juvenile and migrant birds having a dark bill rather than the usual yellow. 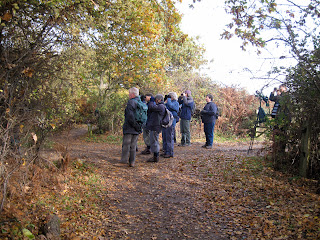 Looking for Goldcrest
At a viewpoint over the scrapes we had our first view of the water fowl that winter here. Hundreds of wigeon making their lovely sounds, teal, mallard, and teal fed, slept and preened, with pintail, shelduck and shoveler adding to the activity. Black-tailed godwit were spotted in the distance, identified by the white bars on the wings as they flew around, whilst groups of moorhen were feeding in front of the hide.
As we moved around the reserve, moving from Netley’s Hide to Little Hanger and Winpenny it became apparent that canada geese were the most numerous bird there with huge numbers feeding on the grass around the pools, and more flying in as we watched. As the biting wind was chilling some of us decided to take lunch in Winpenny and some were lucky enough to see a buzzard flying over. Moving on to West Mead Hide the front-runners disturbed a sparrowhawk which had been drinking or bathing in a small stream at the side of the path. The bird flew to take cover in the base of a nearby hedge and promptly disappeared from sight! 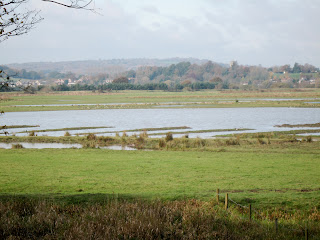 View from West Mead Hide
As we walked back towards the centre – and thoughts of a welcome cup of tea in the cafe to warm us up – we discussed the previous sightings of bullfinch in that area on earlier visits. True to her usual form Sally immediately spotted one in the area that Josie had been referring to, its beautiful pink/red chest colour looking superb in the bright sunshine. With our usual generosity of spirit, we were soon pointing the bird out to several other visitors to the reserve.
Back at the centre the group disbanded with those taking warming refreshments, others browsing in the shop, and the rest deciding between a second circuit or a walk around the heathland trails behind the car park. Whilst we sorted ourselves out there were marsh tit, coal tit, blue and great tit on the feeders and then a nuthatch came into the ground feeder, rather nervously at first, but after the main group had moved off some of the others spotted two at the same time.
From the heathland trails, we saw lesser redpoll and goldcrest, along with great views of treecreeper, with their lovely white fronts. 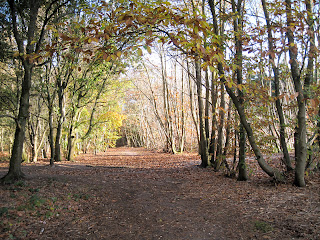 Autumnal scene
With everyone delighted with the day out we gathered back at the coach for our efficient trip back to Gravesend.
Thanks Sally, for arranging another great trip.
YTD bird species total: 161