On a cold wintry day with snow falling I found myself with my usual Wednesday crew walking at Cliffe.   As we donned our layers a group of around 30 chaffinch fed on seeds nearby, as we moved around they flew across the car park to nearby trees then returned as their confidence grew.   Linnet were also seen in the flock.

We decided a brisk walk would warm us up to start with – so (you can probably second-guess this one) we sauntered along getting colder by the minute.  The two most numerous species during the day were little grebe and coot – at least 50 of the former and over 400 of the latter (I have since seen a blog quoting 450).  Pochard and tufted duck were also amongst the first birds seen from the car park.

As we moved off to try and keep warm blackbird, mistle thrush, robin and wren flew ahead of us.   Blue tit and great tit were feeding in the bushes, making their contact calls as we passed.   In the distance a large bird of prey flew low over the fields and pool.   As we watched the white-rump of a ring-tail appeared, confirming a hen harrier.   The acrobatic flight as it hunted over the reeds was a delight to see.

From the track leading to Cliffe Creek we had more little grebe, tufted duck, pochard and added shoveler.   Moving onwards (by now fingers and toes were aching with the cold) we spotted a male goldeneye, as we scanned a second male and three females were found, the two males displaying.   Stretching their necks out then throwing their heads back almost into the water as they enticed their female companions.   We watched for a while, and I took a rather shakey bit of video – it captured the record.    Further along this track we found a 1st winter male, close in to the bank with faded white patch – we tried to turn it into a Barrow’s but there are limits to our stringing!

On the far side of the pool a grey heron stood on the edge of the reeds with 5 little egret busily feeding nearby – interesting to watch their different feeding techniques.   Pintail up-ended constantly feeding.   With the telescope I noticed a wader which we decided was a greenshank.   Shelduck and shoveler were also present in large numbers.

Soon after we found another smaller bird hunkered down under the bank.   It looked suspiciously like a common sandpiper.

At the head of the flamingo pool we found more dunlin, grey plover and two sanderling – a real surprise for Cliffe.   Curlew gave their eerie call across the marshes as we made our hasty return to the car park.

After a very welcome lunch with Paul, it was back out into the cold, this time at Northward Hill, where a rough-legged buzzard had been seen recently.   Unfortunately we did not catch up with that species, and the view from the Marshland viewpoint was particularly cold and windy.  Rook and jackdaw were most numerous.   A kestrel hovered overhead, as we investigated the badger and fox tracks in the snow.

We scanned the marshes and a bird flew across in front of us and into the scrub below.  We waited for it to reappear but no success.   My thoughts were woodcock, but I did not get a good enough view.  We decided to walk to the other viewpoint, in the hope that the trees and scrub would offer some protection from the northerly wind which was whipping around us.   Malcolm noticed the first woodcock, which Sally and I inadvertently flushed as we walked the track.   We continued through the wood and a second bird was flushed.   As we contined to the viewpoint, yet another woodcock flew away from us, giving reasonable views.   One further bird flew back towards the original site as we continued on our way. 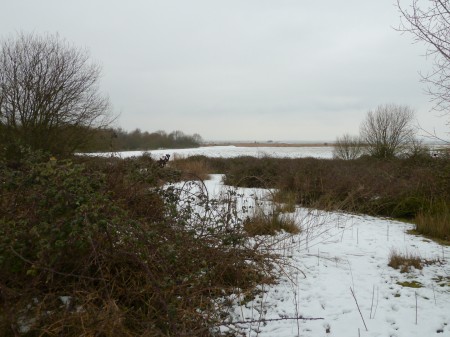 A sparrowhawk flew across the field in front of us disturbing goldfinch, chaffinch and the rooks were gathering in the late afternoon sunlight prior to roosting in the wood.   One grey heron was seen on the marshes, but hopefully it won’t be too long before they are present in numbers prior to their nesting season – oh, for some spring sunshine!