17 of the Group turned up today for our trip to Rainham Marshes. The weather was fantastic and it ended up being really warm and sunny for February.

We walked right round the reserve, and saw/heard a total of nearly 50 species during the day. There were many birds around the feeders, including house sparrow, goldfinch, chaffinch, collared dove, greenfinch and dunnock. We saw many birds on the pools including grey heron, wigeon, pintail, snipe, teal, shoveler, gadwall, mute swan, tufted duck, shelduck, pochard, little egret and many gulls including common and lesser black backed. The pintail were especially spectacular in the sunshine. Around the wooded area were blue, great and long-tailed tits, chaffinch, robin, blackbird and we heard songthrush and cettis warbler singing. There were good numbers of reed bunting showing well at several areas on the reserve. 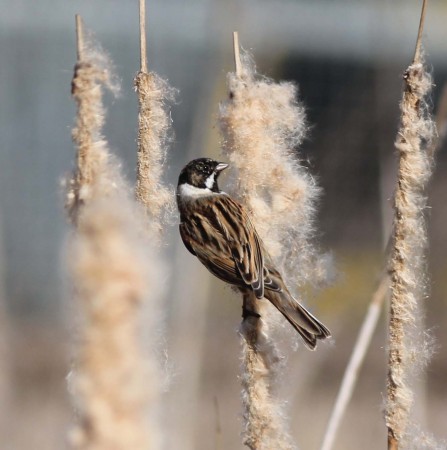 We watched huge flocks of lapwing, golden plover and dunlin circling above the pools, and stopped to look at the peregrine which was perched up in its usual place high on a pylon. On the way back to the centre we stopped to look for bearded tit and water vole, but unfortunately did not see them.

After a very pleasant lunch in the sunshine at the centre’s picnic area, some of us walked along beside the river, and were lucky enough to come across some other birders who pointed out a curlew sandpiper which they had spotted at Aveley Bay. A flock of redshank flew across in front of us onto the reserve. When we got back to the centre, most of the Group went off home, but four of us went back to the ‘bus stop’ to have another look for the bearded tits which had been reported there. We didn’t see them, but had good views of a pair of stonechats.

A really good day – it was especially nice to see some of the Group who we hadn’t seen for some time on outdoor trips, namely Geoff and Cynthia, Brenda and Josie.