Our trip to Dungeness was eagerly anticipated, as always.   A great venue and the weather was set to be sunny and warm.   We gathered in the car park by the Old Lighthouse with plenty of time to spare so Malcolm, Sally and I decided to enjoy a cup of tea at the station cafe.    As we sat in the sunshine a hobby flew overhead.   We also spotted starling, house sparrrow and crow from the cafe garden. 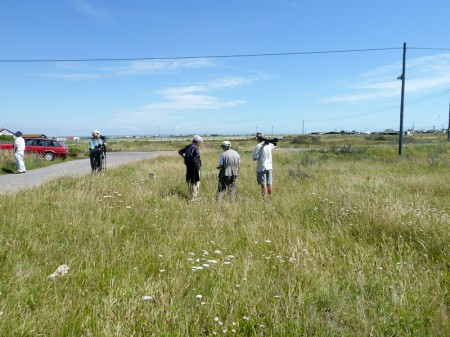 The weather was clear and the sea calm and the beach was lined with fishermen as there was presumably a competition on.    Despite the activity there were lots of gulls and terns on the beach and feeding around the “Patch”.   Cormorant and gannet flew past and there were herring, great black-backed and black-headed gulls on the beach along with several common terns.   A pod of porpoises entertained us for a while, and a flock of at least 15 oystercatchers flew towards us then veered off towards the reserve.

We decided to follow suit and made for the Hanson Hide.    From here we saw coot, pochard, tufted duck, lapwing, common sandpiper, little ringed plover, ringed plover, garganey, sedge warbler, shoveler, greylag, dunlin, common tern, great crested grebe and mute swan.    At one stage a flock of 13 golden plover flew over but decided not to land, as they circled we could see their distinctive black bellies and chests, and their golden plumage caught the sunlight beautifully as they banked around. Soon, with lunch calling us we headed off to the Reserve.    From the hides I noted ringed plover, turnstone, lesser black-backed gull, canada geese, pochard, great crested grebe and mallard. With sand martin swooping over the water.   Alan found some solitary wasps digging nests, Malcolm believes these are Cerceris.   It is the females that dig the tunnels in which to place eggs.   These wasps prey on beetles.

A marsh harrier hunted over the shingle. It looked like a juvenile, with dark plumage and a very pale head.   The shoulders were dark, so probably not an adult female. 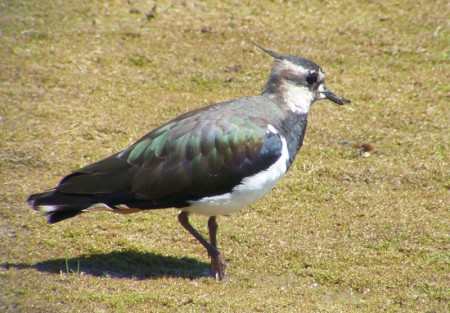 Denge Marsh Hide gave the best views of common tern with several nests visible on the tern rafts.   On one of the rafts there was an adult minding two chicks – one a bit of an adventurer as he kept standing on the very edge of the raft giving those in the hide a few worrying moments.   After a sharp call from the adult, it resumed it’s rightful place behind the parent in the corner of the raft protected from prying eyes and the heat of the sun. Another nest had three eggs.   On a further raft there was an almost fully fledged chick, which was stretching it’s wings, but did not take to the air when the other terns on that raft flew up in a panic – so presumably it wasn’t quite ready for the maiden flight yet.

As we looked from the viewpoint Sue found a small common toad trying to escape into the long grass – a lovely creature . . .  well judge for yourself.

Thank you to Sue and Ian for stepping into the breach and leading on behalf of  Jeff and Wendy who were celebrating the safe arrival of their second grandchild – we’ll let you off on this one occasion.