This week my friends and I were off to St Mary’s  Jeff’s account of the meeting we had missed on Sunday spurred us on to take a visit.

On the way down the A2 it didn’t seem like a very good idea as the rain poured down and the spray from lorries made driving rather hazardous.    Luckily Sally’s prediction that we would pass through the storm was correct and by the time we arrived the rain had stopped. It was still extremely windy though with a strong south-westerly blowing.

Once parked, we moved off to investigate the land above the memorial.    Blackbird was the first sighting, and as we watched the bushes and hedges we found that there were many Wood Pigeon, Chaffinch and Robin flitting about in the bushes.    As we watched a large flock of Redwing appeared and started to feed up on the succulent berries in the hawthorn bushes.    Goldfinch flew overhead with their usual chattering filling the air, Jackdaw and Crow strutted about in the fields nearby and Great Black-backed and Black-headed Gulls were gathered in nearby fields enjoying the autumn sunshine.    As we continued on our circuit Blue Tit were calling to each other as they fed in nearby trees.

As we returned to the car three swallows flew overhead.    After a warming cup of tea in the cafe we decided to move on to Sandwich Observatory for lunch and another wander. 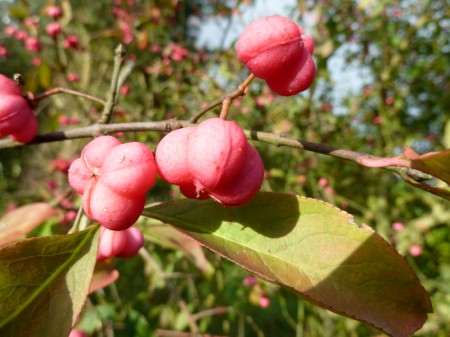 On arrival we had large numbers of Swallow and Chaffinch flying over, they were amazingly agile and swift as they flew into the wind and over our heads at great speed.    Crow, Rook and Jackdaw were feeding in a newly ploughed field nearby.    Pied Wagtail shot past identifiable only by their call.

We wandered into the Visitor Centre and were told that there were Crossbill and Ring Ouzel near The Elms.    Off we went on our minor twitch.    Needless to say we had delightful views of Goldcrest and Blue Tit, and saw at least 20 Blackbirds, but neither of the specialities appeared.   There were also several bracket fungi and mushrooms to view, including a Blue Roundhead or Stropharia caerulea Kreisel, a beautiful teal coloured specimen with white “thorns” on the stem. 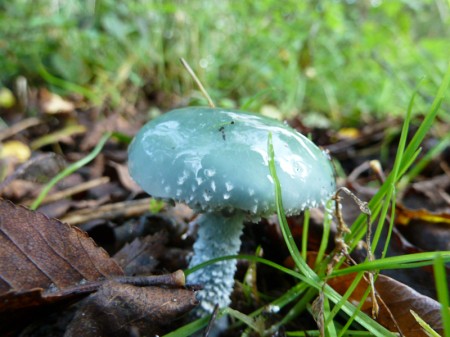 Kestrel hovered over the dunes between the wood and the sea.    Eventually we admitted defeat and moved off to the scrape hide.

Here we had another great view of a Kestrel hovering, this time over the field behind the pool.    On the water we noted Teal, Moorhen, Little Grebe and at least 14 Snipe.    We spent some time watching the birds going about their daily routines, feeding, preening, and in the case of the Snipe just sitting stoically in the reeds catching the last of the sunshine.

Soon it was time to return to the car – losing the hour at the weekend means our days are somewhat curtailed in the winter months.    We scanned the fields along the road on the way back and found more Goldfinch, Wood Pigeon, Rook, at least 14 Collared Dove and over 70 Fieldfare.    Robin and Chaffinch completed the Sandwich list.    A possible Merlin shot through at one stage but it was too quick to get a good look at.

So, why today’s heading?    Well, as the first three swallows flew over our head this morning Sally asked if “three swallows make a mouthful?” [Collective nouns I have found on the internet so far are a flight or gulp – so Sally wasn’t far off!

2 Responses to “A Mouthful of Swallows?”