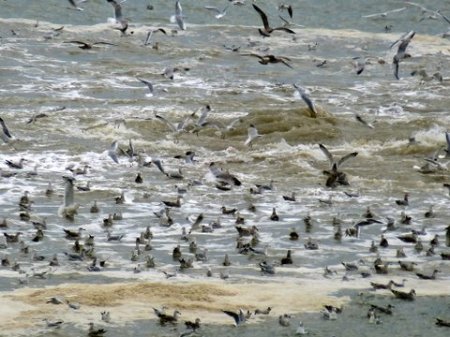 On Saturday 10 group members visited Dungeness. As usual we gathered by the Lighthouse and walked the short distance to the shingle seawall and beach. Those of you that have never visited the Dungeness area may not know about the “Patch”. Waste hot water and sewage (treated!) is pumped out from an outfall pipe from Dungeness Power Station. This pumped water rises to the surface and enriches the biological productivity of the sea water. This attracts sea birds, especially gulls, from miles around. Today large numbers of herring gulls and black headed gulls were wheeling and screaming over the “patch”. But try as we might we could not find any of the rarer gull species that are often seen here. Even so it was quite a spectacle! Also offshore we saw gannets, great crested grebes and a few of us caught a glimpse of a porpoise.

We next visited the RSPB reserve – for lunch and “facilities”. Goldeneye, smew, and goosander were soon spotted and great white egret, little egret and grey heron soon followed. We went in search of a bittern but, despite sitting quietly in Christmas Dell hide, we waited in vain. My suggestion that we should go to see the two cattle egrets viewable just off the reserve was ignored by Irene and thus we failed in our attempt of a five “heron” day! Dungeness is one of the few places in Britain that this can be done. On the way back to the visitor centre we found two overwintering chiff chaffs and a song thrush!

Thanks to Irene for leading.