Looking at the reserve noticeboard on arrival, we could see it had been a very quiet few days on the bird front. Undeterred, our group of 13 set off via the West lake where we saw great crested grebe with young, cormorant, black-headed gull and tufted duck. As we passed over the Darent there was some discussion as to whether “spraint” (with visible bones) on a rock could be otter. The first of many blue damselflies, a mixture of blue-tailed and common blue were seen shimmering in the sun and wrens were heard singing in the background. We decided to visit the diminutive John Carter hide, a delight, sadly for only two of us, as a kingfisher flew low across the water! One of the islands further on still had the remains of four or five heron nests – where some of us had watched young herons on the nest earlier this year. The Willow Hide had the usual array of geese, Egyptian, Canada and Greylag, but we also saw coot, moorhen, heron, little egret, little grebe, mute swan, crow and magpie. Dragonflies, dazzling in the bright sunshine included Southern hawker, Emperor, Brown hawker and also Ruddy darter. Butterflies were also showing well. These included painted lady, speckled wood, meadow brown, green-veined white, red admiral and comma. 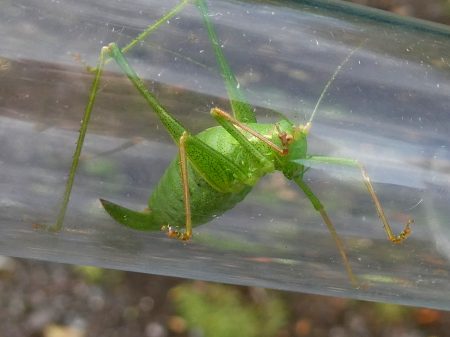 Malcolm caught a female speckled bush cricket for us all to view. Many flowering plants were seen with yellow fleabane, mint and teasel making a particularly pleasing combination. We then returned to the visitor centre for lunch.

During lunch John wandered off and found this beautiful mint moth. 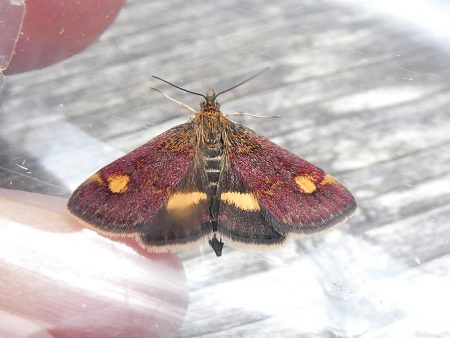 After lunch, from the viewpoint we had our first sight of lapwings and many of the other water birds on the lake. Two buzzards were soaring above the tree line. From the John Tyler hide we were able to add teal, sparrowhawk and gadwall to the list. Cormorants were relishing the good weather to preen and stretch to dry their wings.

There was an abundance of purple loostrife here. Finally, at the Ray Slingsby Memorial hide a lucky few glimpsed another kingfisher. Although we saw very little in the way of birdlife from here, we were treated to several flypasts as a result of the Biggin Hill Air Show. This kept us on our toes identifying Spitfire, Hurricane and Messerschmitt. Some were sporting invasion stripes. Anyway, enough of that – we went on to see another sparrowhawk, blue tit and coal tit and long-tailed tits were heard.

Just over 30 bird species were seen in total for this part of the day. Ice creams back at the car park finished off the trip very nicely.

A handful of us ventured on to Bough Beech, with darkening skies and a little rain. But we were rewarded with good views of 6 green sandpipers, 4 pied wagtail, lots of heron (many of them young), little egret and the usual selection of geese. An enjoyable day out with friends.

Thanks to Pauline and John for leading and for the report. Technical issues have delayed this report. It must have been up in that “cloud” that people keep talking about. Thanks to Sally for the photographs.

One Response to “Group Trip To Sevenoaks Kent Wildlife Reserve”