In previous years some of us have made a one day “survey” of grey wagtails along the river Darent. We have shown that at least 5-6 pairs breed successfully between Farningham and Otford. This year we were rather unsuccessful, we found the birds at only two sites and saw only one fledgling. However, as with all quick surveys, it is easy to get a positive result but much more difficult to prove that the birds are not there – perhaps they were out of view, just round the corner, feeding 5 young! But the Darent is such a lovely river, and we see so many other birds, insects and flowers that we are sure to be back there next year. We also make sure our sightings are made available to the Kent Ornithological Society and the London Bird Club.

At around the same time I led three wildlife walks around Rochester Cathedral. Some years ago I used to lead guided bird walks around Millbrook Garden Centre in Gravesend. These were organised by Graham who was responsible for the outdoor areas. Graham and many of the other staff at Millbrooks were keen on birds. And birds nested all over the site! Graham had put up bird boxes but most birds preferred to find their own site – blackbirds liked nesting amongst the trays of bedding plants for sale, robins and wrens were keen on stacks of pots, and great tits nested inside the main electric control box. My favourites were the song thrushes that nested in and around the outside canopy for several years.

One song thrush nested in a very small potted ornamental olive bush next to the cafe door. They fledged young even though every time someone opened the door it hit the pot and made the olive bush rock from side to side. Perhaps it helped the fledglings get to sleep! One of the fledglings even decided to make the cafe its home. The guided walks stopped when Graham left Millbrooks. I have kept in touch with Graham and recently he changed his job again and he is now Head Gardener at Rochester Cathedral. He invited Sally and I to visit and find out about his new job. After a tour around his new “domain” he asked me if I wanted to lead wildlife tours around the cathedral grounds. I like a challenge so why not!

I knew this was going to be a bit more difficult than Millbrook so I made some “pre-visits” and actually came up with a plan! Shortly before the first guided walk an excited Graham contacted me to tell me that two grey wagtails were regularly feeding on the lawn in the cloister. Nonsense I said – they must be pied wagtails. Grey wagtails don’t do that sort of thing. When I arrived (10 minutes before the walk was due to start) Graham led Sally and  I to the cloister. And yes – there on the lawn were two grey wagtails. 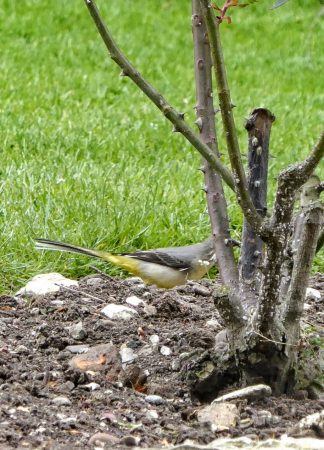 Sally just managed to get a photograph as one bird ran around the rose bushes! This was extraordinary and I knew that this was an absolute winner (for my guided walk). So I went back into the cathedral, met the large group of people that were joining me. I knew that I would have to change by plan. After the introductions, I told them I was going to show them something really special. I carefully opened the ancient wooden door to the cloister and quietly ushered my group to the best viewing point. You may have guessed it already but the grey wagtails were gone. Not to be seen for the rest of the tour! But the tour did go well and I was asked to do two more tours in May. Before I left I told Graham that the grey wagtails would probably leave in the next week or so and move up the Medway to find suitable breeding habitat.

Shortly before the next tour Graham contacted me to say that the grey wagtails were still on the lawn – he thought they might be feeding young, because they were often seen carrying food. Nonsense I said. Grey wagtails breed by fast running streams where they catch mayflies etc. When we arrived for the tour Graham took us straight to the cloister and, amazingly, there was a grey wagtail collecting food. We watched it for some time and it then flew up to the roof. Do I need to tell you what happened next? I gathered my group together and yes – we didn’t see the birds. In the afternoon there was a second tour – again no grey wagtails.  Of course, we did see lots of other wildlife. Two pairs of blue tits, breeding in holes in the old walls,  put on a good show of feeding young. So did the house sparrows. In one corner of the cloister on an ivy-covered wall a large group of house sparrows were happily singing away. Appropriately a singing group of sparrows is known as a “chapel”. We had lots of interesting plants and ferns growing on the wall, lots of insects in the “herb garden” and some wonderful old trees in the orchard. We also had a look at Graham’s new vineyard and apiary. My highlight of the tours was my first ever opportunity to dig up a plant of Lords and Ladies (Cuckoo-pint). The berries and the rest of the plant are very poisonous but I wanted to have a look at the tuber. In Elizabethan times this was used as a source of starch which allowed the construction of neck ruffs for the wealthy. But for the women who dug up the plants, made and used the starch it was bad news.

“The most pure and white starch is made of the roots of of Cuckow-pint; but more hurtfull to the hand of the Laundresses that hath the handling of it, for it choppeth, blistereth, and maketh hands rough and rugged and withall smarting.” Gerarde (1597). It is the needle-like crystals of calcium oxalate that work into the skin that are the problem. 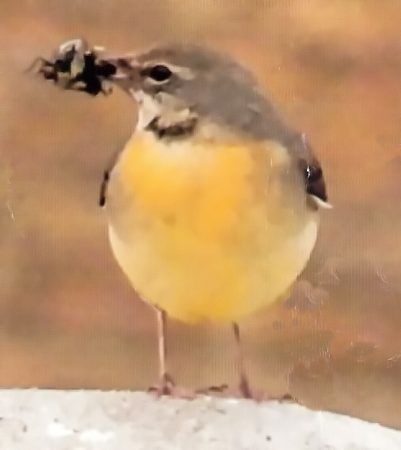 Shortly after our visit, Graham and other staff were able to visit the cathedral roof to view a “D Day” aircraft fly past. While on the roof he saw the grey wagtails feeding young!

So what do we learn from all of this? Well the first and most obvious is, don’t go bird watching with me go with Graham. And second – Nature is amazing!

Thanks to Sally and Graham for the photographs and to Graham for suggesting and organising the wildlife tours.

PS. Sally and I went to Rochester last week for a Christmas lunch with Graham. The grey wagtails are still around he said. So after lunch we went back to Rochester Cathedral to have a look. Don’t even bother to ask!

7 Responses to “Grey Wagtails, The River Darent and Rochester Cathedral”